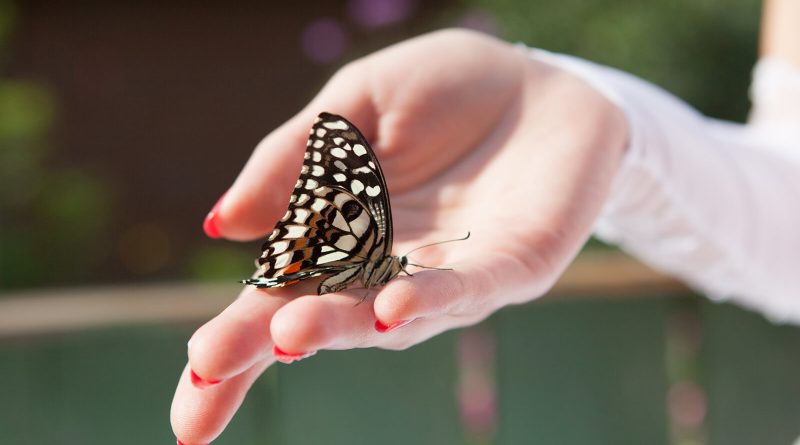 Wasps are a diverse subgroup of the order Hymenoptera, suborder Apocrita, which also includes both bees and ants. There are over 100,000 wasp species worldwide, of which only around 33,000 sting. We have covered their role in the ecosystem, how they differ from bees, and nest identification in previous articles. Here, we will discuss common wasps that you’re likely to encounter. The most common type of wasps varieties include the paper wasps, yellow jackets, hornets, mud daubers, and cicada killers.

Paper wasps are social wasps belonging to the genus Polistes that are often encountered around buildings. They are united by their nesting behavior (umbrella-shaped papery structure of hexagonal cells), long abdomens, and narrow waists. Paper wasps have longer legs and are less aggressive than yellow jackets. The toxin in their stings is also less dangerous to humans. Paper wasps hunt in fields and meadows and build their nests under building eaves or overhangs. Like other wasp species, adults feed other insects (often those considered pests) to their larvae. Coloring typically differs by species, though many have yellow abdominal bands. Northern (P. fuscatus) and European (P. dominula) paper wasps are the most common. Northern paper wasps range from reddish-brown to black and grow to about ¾ of an inch while European paper wasps are yellow and black and can be mistaken for yellow jackets. Northern paper wasps are native to North America and are common in the midwestern United States. The native range of the European paper wasp comprises Mediterranean countries, southern Europe, northern Africa, the Middle East, and China. Since the 1970s, it has further been found in North America.

Yellow jackets, and the closely related hornets (both social wasps) fall into the family Vespidae. Yellowjacket wasps are distributed in the genus Vespula and related genera and are identified by abdominal banding in black and yellow. They are typically about ½-inch long. They nest in cavities either underground or inside trees and buildings. Like paper wasps, their papery nests are composed of hexagonal cells, but yellow jacket nests are enclosed within an envelope. Of the four most commonly encountered species, eastern and western yellow jackets (V. maculifrons and V. pensylvanica) are ground wasps, nesting in underground burrows, German yellow jackets (Paravespula germanica) are found aboveground in building cavities, and bald-faced hornets (Dolichiovespula maculata) hang their nests from building eaves or trees (much like paper wasps). More aggressive than paper wasps or solitary wasp species, the majority of Hymenoptera stings are inflicted by yellow jackets. This is also due to the diet of adults. While larval yellow jackets eat other insects, adults consume nectar, fruit, other sugary substances, and meat. This makes them frequent guests at human picnics. While yellow jackets are found globally, they are most common in the United States’ southeast region.

Hornets (Vespa spp.) are primarily black or brown with yellow, orange, or white facial, thoracic, and abdominal markings. A black and white wasp is likely of the hornet variety. They typically reach lengths of an inch or more. Common hornets include the Asian giant hornet (V. mandarinia) and the European hornet (V. crabro). Asian giant hornet workers can be up to 1.6 inches long, while queens are even longer. European hornets (also called giant hornets) aren’t far behind, growing up to 1.5 inches long. They build their nests in cavities in trees or under roofs. Like yellow jackets, they build a protective envelope around their nests. Also, like yellow jackets, adults eat nectar and fruit. They are aggressive in defense of their nests, though less so than yellow jackets. European hornets, though introduced, are the only true hornets found in North America. They arrived from Europe in about 184015.

Cicada killers (Sphecius spp.), comprising 22 species worldwide, are the largest of the common wasps, up to 2 inches in length and stocky. Cicada killers of eastern North America (S. speciosus) are reddish brown with yellow body banding and yellow legs while the southern species (S. hogardii) is a primarily red wasp with a variable black abdominal tip. A western species (S. convallis) is found in western North America, particularly California. They are solitary and nest underground, packing larval cells with paralyzed cicadas. Cicada killers are less aggressive toward humans than yellow jackets and hornets.

Although there are thousands of different types of wasps worldwide, you are only likely to encounter a subset of them and these can be collected into groups of similar species. Here, we have presented the most common types of wasps and, within those groups, the most common species. The goal is to provide you with a quick guide to wasps you may run across, including what they look like and how aggressive they can be.

Deep Clean Your Home And Spaces With Jacobsens-Rengring Company Top Reasons to Landscape Your Garden

Without a doubt, the Business-to-Business (B2B) marketing landscape has dramatically changed over the past decade. Heightened digitalization has empowered business

How To Know About The Best Vocational Schools In Dallas